More than 40 years ago I have read a book that influenced me in my thinking about painting the landscape. The title of the book was: Henry P. Bowie, On the laws of Japanese Painting. An introduction to the study of the art of Japan. Toronto 1952 (Dover publications Inc.) (originally: San Francisco 1911). The book is also published as a Gutenberg-file on internet: http://www.gutenberg.org/files/35580/35580-h/35580-h.html

Later on a Japanese painter inspired me. His name was Kaii Higashiyama. I got a catalogue of an exhibition in Germany of his work and I was so impressed by his art and the way he painted that I choose to work only with pigments, binder and water. I stopped working with oil-painting. This work of Higashiyama was described in: Kaii Higashiyama. Ein Meister japanischer Landschaftsmalerei, herausgegeben von Walter Raunig, Klaus Schrenk und Andreas Lüderwaldt, Innsbruck, Frankfurt am Main 1983, (Pinguin-Verlag, Umschau Verlag). His work is always in my mind painting the landscape.

Painting the landscape inspired by Chinese and Japanese landscapes isn’t easy because if you take it serious there are some rules to attend. Bowie says:

“Landscapes are known in art by the term SAN SUI, which means mountain and water. This Chinese term would indicate that the artists of China considered both mountains and water to be essential to landscape subjects, and the tendency in a Japanese artist to introduce both into his painting is ever noticeable. If he cannot find the water elsewhere he takes it from the heavens in the shape of rain.” (o.c. p. 51) 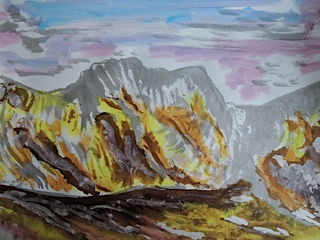 Mountain and water have become main subjects in my painting over the years. I got also inspired by the German painter Casper David Friedrich who was one of the first who give the landscape a proper attention in painting. His paintings have a religious meaning. that was in Germany a new way of looking at the landscape.

The Dutch painter Armando uses the landscape as a metaphor for experiences in the past during World War 2. His black landscapes testify about the horrors that took place. I saw his work the first time in the ‘Stedelijk Museum’ in Amsterdam in the 70’s. In the same periode I discovered the art of the German painter Anselm Kiefer. His immense paintings impressed me, especially the horizon in his landscape. I started thinking about this fact and I discovered the horizon as an important theme in my work. In the horizon heaven and earth are meeting. Bowie writes about this:

“The landscape contains a lofty mountain, rocks, river, road, trees, bridge, man, animal, et cetera. The first requisite in such a composition is that the picture respond to the law of TEN CHI JIN, or heaven, earth and man. This wonderful law of Buddhism is said to pervade the universe and is of widest application to all the art of man. TEN CHI JIN means that whatever is worthy of contemplation must contain a principal subject, its complimentary adjunct,, and auxiliary details. Thus is the work rounded out to its perfection.

This law of TEN CHI JIN applies not only to painting but to poetry (its elder sister), to architecture, to garden plans, as well as to flower arrangement; in fact, it is a universal, fundamental law of correct construction.” (o.c. p. 51-52)

Laws in painting the landscape can be helpful to achieve goals if you want to express your feelings in this special tradition. But I’m not a Japanese painter and my paintings are a mix of different styles and influences. Higashiyama, Kiefer, Armando en Friedrich are all part of it.

I bought in the 80’s 12 little touristic pictures from a place in Austria after 1938, Mayerhofen, just occupied by the Germans. This pictures were a starting point for a set of 12 paintings which I called “not-guilty landscape?”, a reference to the work of Armando, which he called “Guilty landscape”. That was the beginning of painting sets of landscapes based of photographs. Before that time I have used photo’s in collages and small paintings. I’m feeling free to do so and the landscape that is painted is inspired by the photo and the music I’m listening to during painting. Bowie writes according to this:

“Japanese artist are not bound down to the literal presentation of things seen. They have a canon, called esoragoto, which means literally an invented picture, or a picture into which certain fictions are painted.

Every painting to be effective must be esoragoto; that is, there must enter therein certain artistic liberties. It should aim not so much to reproduce the exact thing as its sentiment, called kokoro mochi, which is the moving spirit of the scene. It must not be a facsimile.” (o.c. p. 80)

This way of painting is surely part of my work up till now. I’m using different kind of brushes . I prefer brushes with long hairs. I use them for drawing the accents in my landscape. I’m feeling at home with the remarks of Bowie concerning the brush. He writes:

“The law of YO HITSU requires a free and skillful handling of the brush, always with strict attention to the stroke, whether dot, line or mass is to be made; the brush must not touch the silk or paper before reflection has determined what the stroke or dot is to express. Neither negligence nor indifference is tolerated. 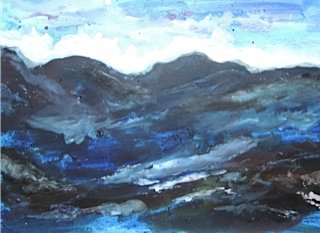 An artist, be he ever so skillful, is cautioned not to feel entirely satisfied with the use of the brush, as it is never perfect and is always susceptible of improvement. The brush is the handmaid of the artist’s soul and must be responsive to his inspiration. (…)

A distinguishing feature in Japanese painting is the strength of the brush stroke, technically called fude no chikare or fude no ikioi. When representing an object suggesting strength, such for instance, as a rocky cliff, the beak of talons of a bird, the tiger’s claws, or the limbs and branches of a tree, the moment the brush is applied the sentiment of strength myst be invoked and felt throughout the artist’s system and imparted through his arm and hand to the brush, and so transmitted into the object painted; and this nervous current must be continuous and of equal intensity while the work proceeds.” (o.c. p. 33-35)

When I read the book of Bowie I was very impressed by the way the artist had to paint his object. His whole soul is in action, his heart guided his hand and his hand holds the brush. The description of Bowie guided me all the time during the years I’m painting. His says:

“One of the most important principles in the art of Japanese painting – indeed, a fundamental and entirely distinctive characteristic – is that called living movement, SEI DO, or kokoro mochi, it being, so to say, the transfusion into the work of the felt nature of the thing to be painted by the artist. Whatever the subject to be translated – whether river or tree, rock or mountain, bird of flower, fish or animal – the artist at the moment of painting it must feel its very nature, which, by the magic of his art, he transfers into his work to remain forever, affecting all who see it with the same sensations he experienced when executing it.

This is not an imaginary principle but a strictly enforced law of Japanese painting. The student is incessantly admonished to observe it.

In Japan the highest compliment to an artist is to say he paints with his soul, his brush following the dictates of his spirit. Japanese painters frequently repeat the precept:

Our spirit must make our hand its servitor;

And so I’m trying every day to work in this kind of spirituality.